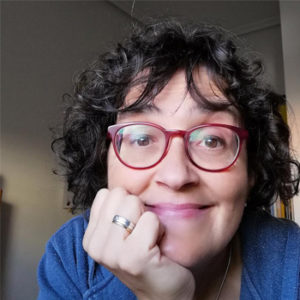 After many years of seeing patients (both in the NHS and in the Spanish Health Service) she changed her tools and now continues to be a doctor with pencils rather than a stethoscope.

She is the founder of the Spanish speaking group of Graphic Medicine: Medicina Gráfica.

Monica’s special interest is bioethics and professionalism and she is an activist cartoonist for doctors rights and patients dignity. Director of the Masters Degree in Graphic Medicine (International University of Andalucia).

Author of Conciencia Médica (the comics version of the Spanish doctors ethics code) and co-author of Menopause, a comic treatment (winner of an Eisner Award in 2021).

She spends far too much time in Twitter as @mlalanda. Mother of two and wife of one.