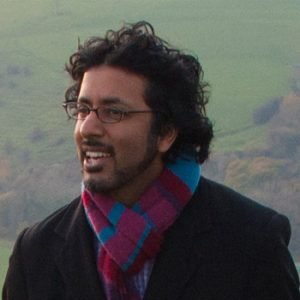 Ash Ranpura is a neurologist and neuroscientist who has been active in brain research for over 20 years. He received his bachelor’s degree from Yale University, an M.D. from the Medical College of Ohio, and carried out his Ph.D. research at Queen Square in London, as part of UCL’s Institute of Cognitive Neuroscience.

He completed a clinical residency in adult neurology at Yale-New Haven Hospital, where he maintains research interests in mood disorders and epilepsy. In addition to his clinical and research work, he was a co-founder of Café Scientifique at the Photographers’ Gallery in London, a founding editor at BrainConnection magazine in San Francisco, and a writer at National Public Radio’s “Science Friday” in New York.

He frequently chairs public science events for organisations including the British Council and the American Medical Association, and has written a book (How to Be Human) with the performer Ruby Wax and Buddhist monk Gelong Thubten about mindfulness and the brain. He lives in Somerset with his wife, the novelist Susan Elderkin, and their son.