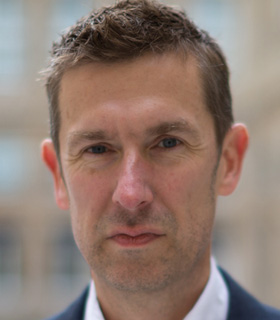 A native of Ireland, Dr. Greally received his honours degree in Medicine from the National University of Ireland in Galway (NUIG) in 1988, subsequently moving to the Children’s Hospital of Pittsburgh for Pediatrics residency and Yale University in 1993 for subspecialty training in Clinical Genetics. Since his clinical training, he focused on basic science research, receiving his PhD degree in 1999 from NUIG.

Dr. Greally’s research is in the area of epigenomic regulation of the genome, and its dysregulation in disease. Dr. Greally is the founding director of the Einstein Center for Epigenomics, where the development of computational resources to manage and analyse complex data sets from massively-parallel sequencing has been a priority from the establishment of the Center in 2008. He serves on the editorial boards of the journals PLOS Genetics, Genomics and Epigenetics and Chromatin, and is involved with the New York Genome Center.

His research includes studies of the epigenetic regulation of cell differentiation and transcription-targeted cytosine methylation, and epigenetic abnormalities in human diseases such as autism spectrum disorder, osteosarcoma, type II diabetes mellitus, hepatitis C virus and toxoplasma infections. He also performs clinical duties at the Children’s Hospital at Montefiore as a Clinical Genomicist, seeing patients who have been tested with new genome-wide technologies.

One of his areas of interest is in the visualization of biological data. A pressing issue in genomics today is how to allow data of vast magnitude and complexity to be interpreted by people lacking computer programming skills. To address this issue, he would like to bridge the divide with those people who are skilled and trained in expressing ideas through visual media, artists and data visualization experts.

During his recent sabbatical, he has rented space in an artists’ studio in Chinatown in which he is developing his own work, transforming digital molecular biological images to paint on canvas. By understanding this process of creativity more directly, he is hoping to learn to communicate more effectively with artist colleagues so that the problem of genomic data interpretation can be jointly tackled by both disciplines.